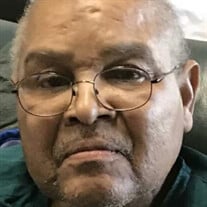 Alexander “Eddie” Salley, was born on June 29, 1947 to William Salley & Josiephine Perry Salley in Sparkman, Arkansas. Eddie moved to Arkadelphia as a small child attending school until he was inducted into the US Army December 6, 1967, during the Vietnam War; being honorably discharged, December 5, 1969. On January 29, 1971, he married Shirley Ann Mays of Helena, AR; although their marriage ended, they remained close friends. To their union 4 children were born. He was employed by and retired from Reynolds Metals Company in Malvern, AR and Troutdale, OR for 33 years combined. Later because he couldn’t stop working he became a truck driver and trainer with Werner Enterprises. He enjoyed truck driving and wanted to keep all of his money for himself, so he purchased his own rig to travel throughout country. Eddie loved his children as well as his extended family dearly. Holding the tradition started by his father he visited many family members every year during the July 4th season. Eddie is preceded in death by his father William Elma Salley, and mother, Josephine Perry Salley. He is survived by one daughter, Stephanie Salley of Chandler, AZ; four sons, Derek Salley of Arlington, TX, Michael Salley and Brian Salley, both of Portland, OR, Brenton Lidgett, of Seattle, Washington; four grandchildren, Kenya Baker of Burtsell, AR, Kameron Salley of Denton, TX, Tiana Hunter of Chandler, AZ, Jalen Hunter of Curtis, AR; one great grandson Christian Baker of Burtsell, TX; one sister, Stella Brownlee of Palmer, AK; two nieces Charita Futrell of North Little Rock, AR, and N’Teasha Brownlee of Alexandria, Virginia; two nephews, Brandon Buckley and Adrein Brownlee both of Salem, OR; caregiver, Ruthie Hart; and a host of beloved relatives and friends.

Alexander &#8220;Eddie&#8221; Salley, was born on June 29, 1947 to William Salley & Josiephine Perry Salley in Sparkman, Arkansas. Eddie moved to Arkadelphia as a small child attending school until he was inducted into the US Army December... View Obituary & Service Information

The family of Mr. Alexander "Eddie" Salley created this Life Tributes page to make it easy to share your memories.

Send flowers to the Salley family.