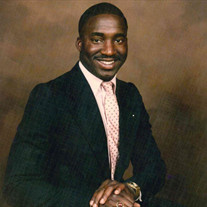 With sincere regret, the staff of D.L. Boyd Funeral Home, LLC., wants to extend our deepest sympathy to the Ingram Family. Mr. Anthony Lee Ingram’s earthly temple is now resting in the care of D.L. Boyd Funeral Home. John 11:25-26 Jesus said unto her, I am the resurrection, and the life: he that believeth in me, though he were dead, yet shall he live: And whosoever liveth and believeth in me shall never die. May God bless and keep you in the days ahead as you gain strength from the memories of Mr. Anthony Lee Ingram. Anthony (Big A) Lee Ingram, age fifty-three of Little Rock, AR transitioned life on Tuesday, August 28th, 2018. He was born to Howard Ingram and Dorothy Mae Barnes on September 30th, 1964 in Little Rock, AR. He was the fourth child of Dorothy Barnes. He joins his mother Dorothy Mae Barnes, Grandmother and Grandfather Bose and Hattie Barnes Sr.; uncles Bose Barnes Sr., Ernest Lewis; aunts Lula Mae Barnes, and Mary Ella Parks who preceded him in death. Anthony graduated from Mills High School of the Pulaski County Special School District in 1983. He was student body president in his senior year of high school. He was given the nickname "Big A” by one of his mentors, because he was an outstanding all-around athlete and excelled in academics. He played baseball, football, ran track and later settled in basketball. He was awarded a basketball scholarship to the University of Arkansas at Little Rock and later transferred to Northern Arizona University (NAU) in Flagstaff, Arizona. He is a member of the NAU Athletics Hall of Fame Men's basketball team named Big Sky Conference Champions for 1985-86. This was the first time the team had ever won the conference title and it was also the first time to receive a bid to a Division I national postseason tournament. His championship jersey hangs high in that basketball arena. While attending NAU he started the first African American Alumni and became a member of the Kappa Alpha Psi Fraternity. He was instrumental in getting the first minority homecoming king and queen elected. He also supported his community by being the president of the NAACP in Flagstaf passing of the Martin Luther King Holiday in Arizona. Anthony always strived for excellence and was successful in obtaining three college degrees including a Master's in Public Administration. He then married Emma J. Russell in 1999 in Scottsdale, AZ and they remained friends after their divorce. He found that he had an aptitude for sales and became a successful car salesman where he was later promoted into management. He recently moved back home and continued to work as a guest teacher in the local school districts and as a care giver. Anthony joined his membership with Temple of Restoration Church of God in Christ under the leadership of Superintendent Robert Robinson. He really enjoyed helping others and knowing that they were happy with his service. Anthony has always had a love for God and never had a problem praising Him. He also got so much joy from the love of his students and the antics that children get into. It warmed his heart when his students would run to him screaming, “Mr. I, Mr. I” and they would wrap their arms around him or whenever they saw him away from the school setting. He leaves behind to cherish his memory: his son, Christopher Lloyd Ingram, brothers: Kenneth (Patricia) Bryant and Eric Brittman of Little Rock, AR; sisters: Cassie Brittman of Dallas, TX and Connie Rucker of Minneapolis, MN; special cousins Cynthia Barnes, David (Pamela) Barnes, Bernard Jackson and Lamont Jackson, and Paige Whitfield; nephews and many other cousins; special friends/brothers Gerald Brown and Cleophus Berry; his mentors Dr. Melvin Smith, Sr., Sidney (Super Sid) Moncrief, Keith Brazier, mother of his son Danita Small and very special friend, Edith Moland and many others from his journey that he has completed The Lord watched over Anthony as he brought joy to many of us with laughter, jokes and sometimes tall tales. Feel free to sign the guest book and leave a comment for the family of Mr. Anthony Lee Ingram.

The family of Mr. Anthony Lee Ingram created this Life Tributes page to make it easy to share your memories.

Send flowers to the Ingram family.