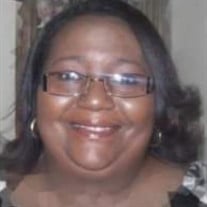 Bernice Lynette Ransfer Criss was born on October 11, 1966, to Arthur Patterson, Sr. and Patricia A. Ransfer Cross in Chicago, IL. She gained her wings and halo on December 24, 2021 at Baptist Health Medical Center-Springhill, North Little Rock, AR. Bernice attended John F. Kennedy High School and continued on to enroll in Malcolm X College in Chicago, IL. She moved to Stuttgart, Arkansas in 1998 to be with the rest of her family. She enrolled in Phillips Community College to earn her Associate's Degree in Early Childhood Education. In the spring of 2005, she graduated and taught preschool for seven years. Bernice became a second mom to her two sisters children. Her favorite saying was, "my offspring is going to be plentiful!" She had a very special love for God and her grandchildren. She was preceded in death by her father and mother; two sisters, Kitt Bishop and Tanya Ransfer and a special son in law, Toney Hall, Jr. She leaves to cherish her precious memory; two sons, Daniel J. Ransfer and Antonio Townsend; one daughter, Krystal M. Townsend; her "second' children, Nicholas Harris, Marcus Lampley, William Lampley, Nigel Bishop, Darryl Cardine, Jr., Tameka Ransfer, and Naomi Bishop; nine granddaughters, two grandsons, one great-grand daughter, four brothers, two sisters, and a host of other special relatives and friends.

The family of Bernice Criss created this Life Tributes page to make it easy to share your memories.

Send flowers to the Criss family.