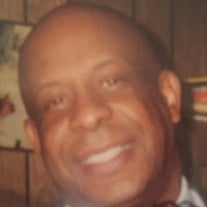 With sincere regret, the staff of D.L. Boyd Funeral Home, LLC., wants to extend our deepest sympathy to the Robinson Family. Mr. Charles Robinson’s earthly temple is now resting in the care of D.L. Boyd Funeral Home. John 11:25-26 Jesus said unto her, I am the resurrection, and the life: he that believeth in me, though he were dead, yet shall he live: And whosoever liveth and believeth in me shall never die. May God bless and keep you in the days ahead as you gain strength from the memories of Mr. Charles Robinson. Charles Robinson was born on June 28th, 1950, in Clarendon, Arkansas to Tommie and Wilse Mae Robinson. He transitioned into eternity on Monday, April 29th, 2019. Charles Robinson graduated from Clarendon High School in May, 1970. He was a leader, athletically inclined, specifically in basketball and was one of the first African Americans who were employed at the Mad Butcher Store in Clarendon. He was joined in holy matrimony to, Sandra Littlejohn and they bored their only beloved daughter, Kelly. Charles moved to Chicago in the year of 1977 and relocated to Las Vegas, Nevada to a warmer climate in the year of 2016. Charles surrendered his life to the Lord at an early age. During Charles’ tenure, he participated in the Triathlon with great success. No person was a stranger to him. He was full of fun, laughter, kindness and he did life his way. He is survived by his Daughter, Kelly (Watt); Mother, Wilse Mae Robinson; Sister, Mary A. Stewart (Lonnie), and Samella Robinson-Paulk (Ron); Brothers, Paul Kelly (Theresa), Jessie Kelly, William T. Kelly, Tommie Lee Robinson, James Robinson (Stephanie), Ontee Robinson, Nathaniel Robinson and Elisha Robinson. Three grandchildren; Kevin, Corey and Keith. Six great grandchildren and a host of nieces, nephews and cousins. He was preceded in death by his father, brother, Eugene; Sister, Wilse Lee, grandparents and grandchild, Christopher. Feel free to sign the guest book and leave a comment for the family of Mr. Charles Robinson

The family of Mr. Charles Robinson created this Life Tributes page to make it easy to share your memories.

Send flowers to the Robinson family.