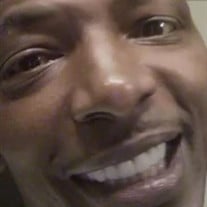 With sincere regret, the staff of D.L. Boyd Funeral Home, LLC, wants to extend our deepest sympathy to the, Daniels/Fourte Families. Mr. Columbus Daniels Jr.’s earthly temple is now resting in the care of D.L. Boyd Funeral Home. John 11:25-26 Jesus said unto her, I am the resurrection, and the life: he that believeth in me, though he were dead, yet shall he live: And whosoever liveth and believeth in me shall never die. May God bless and keep you in the days ahead as you gain strength from the memories of Columbus. Please feel free to sign the guest book, leave a comment, light a candle or purchase a floral arrangement for the family of Columbus Daniels, Jr. Columbus Daniels, Jr., was born Monday, June 12, 1978, to Geraldine and Columbus Daniels, Sr. Columbus was a very adventurous child at an early age. Columbus always put forth great effort in enjoying life. Columbus loved to put a smile on someone’s face. Columbus never met a stranger on his path of life. Columbus attended Sheridan School District where he was involved in football and basketball. He loved sports so much. Columbus was one of the biggest Razorback fans you could ever meet. Columbus most definitely loved and had a relationship with God. He became a deacon in 2018. He was so excited about working for God. Columbus was a grill master with sincere passion for cooking and trying new dishes. Columbus cared about how well he looked and would iron everything, yes, everything if it touched his body it was ironed. Columbus’ love for his family was unmeasurable and he had no problem showing it. Preceded in death by his father, Columbus Daniels, Sr.; paternal grandfather, Mel Daniels and maternal grandfather, James Doll Beasley; brother, Edgar Fourte, Jr. Columbus leaves a host of family to cherish his memory; daughters, Trinity Daniels and Kenyada Clark; granddaughter, Savannah Thompson; parents, Geraldine and Edgar Fourte; sisters, Sherry McCullough (Harold), Darlene Austin( Derrick), Tina Buford (Grover), and Cassandra Harper (Jewell); brothers, Mac Cleveland(Dujan), Broderick Daniels and Broderick Fourte, Sr. and the one who holds the key to his heart, Jamie Hill and his maternal grandmother Dorothy Hull.

The family of Mr. Columbus Daniels Jr. created this Life Tributes page to make it easy to share your memories.

Send flowers to the Daniels family.