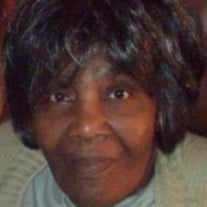 With sincere regret, the staff of D.L. Boyd Funeral Home, LLC, wants to extend our deepest sympathy to the, Morris Family. Mrs. Dorothy Lee’s earthly temple is now resting in the care of D.L. Boyd Funeral Home. John 11:25-26 Jesus said unto her, I am the resurrection, and the life: he that believeth in me, though he were dead, yet shall he live: And whosoever liveth and believeth in me shall never die. May God bless and keep you in the days ahead as you gain strength from the memories of Mrs. Morris. Feel free to sign the guest book, leave a comment, light a candle or purchase a floral arrangement for the family of Mrs. Morris. June 16, 1935, Born Dorothy Lee Rumph in England, Arkansas. She was the youngest of two daughters. Dorothy grew up in England, Arkansas and attended school mostly in McAlmont, Arkansas, where she later played on the girls basketball team for McAlmont HS. She married at an early age and gave birth to her first born. From then on she dedicated her life to raising her nine children. She lived in many different locations throughout central and northwestern Arkansas where she developed many long lasting friendships. As the primary or co-breadwinner for her family, throughout a large portion of her life, she worked in various fields of employment to include housekeeping, senior care, and laundry. She also operated her own catering business in which she often talked about how proud it made her when the patrons expressed how much they loved her cooking. She was an avid church go'er until she started coming down with Dementia. Her pastime was reading the Bible and watching religious shows as she was baptized in Jesus name. She loved quoting bible scriptures to anyone that came near her. A passionate philanthropist donating whatever she could to needy children throughout the world and to the Danny Thomas Foundation/St Jude’s Children Hospital. She also enjoyed fishing, traveling to see her children and turkey sausage. Dorothy entered into eternal rest on Tuesday, December 29, 2020. God sent His Angel to claim her soul. She is now at peace with the Lord. She was preceded in death by her mother, Ms. Malissie Jackson; father, Mr. Ernest "Buddy" Rumph, and her sister, Mrs. Minnie Meadows. Left to cherish fond memories of Dorothy are; sons, Ernest (Rita) Crudup of Avondale, AZ; Derrell (Elisabeth) Turner of Laveen, AZ; Charles (Shirley) Turner of Conway, AR; and Michael Turner (Sarah Coddington) of Concord, CA; daughters, Sharon Jefferies of Ft Smith, AR; Twana Lewis of Ft Smith, AR; Jacqueline (William) Johnson of Little Rock, AR; Lynda Willis of Jonesboro, AR and Loria Ann (Anthony) Williams of Little Rock, AR. She was blessed with, 26 grandchildren; 40 great grandchildren, and 1 great great grandchild and a host of nieces, nephews, cousins, and friends from all over.

The family of Dorothy Lee Morris created this Life Tributes page to make it easy to share your memories.

Send flowers to the Morris family.