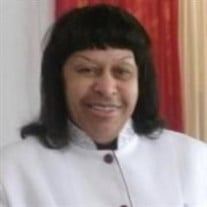 With sincere regret, the staff of D.L. Boyd Funeral Home, LLC., wants to extend our deepest sympathy to the Bryant Family. Evangelist Bonnie Bryant’s earthly temple is now resting in the care of D.L. Boyd Funeral Home. John 11:25-26 Jesus said unto her, I am the resurrection, and the life: he that believeth in me, though he were dead, yet shall he live: And whosoever liveth and believeth in me shall never die. May God bless and keep you in the days ahead as you gain strength from the memories of Evangelist Bonnie Bryant. Feel free to sign the guest book, leave a comment, light a candle or purchase a floral arrangement for the family of Evangelist Bonnie Bryant. Evangelist Bonnie Bryant (affectionately known as “Ms. Bonnie”) went to be with the Lord in eternal life on February 27, 2020. Previously known as Bonnie Holt, she attended Philander Smith College where she received a Bachelor of Arts degree and was a proud member of the Alpha Kappa Alpha Sorority, Incorporated (Gamma Alpha Chapter). Evg. Bryant participated in various student activities, which included serving as a majorette, a member of the French Club, German Club, etc. She was also a strong advocate of education and diversity and knew several languages such as German, French, Russian and Spanish, and was most recently learning Chinese. She furthered her education at Capital City Business College where she studied business and accounting. She instilled educational ideals in her children to ensure that each child received a quality education and understanding of the diverse world around them, which included both principles of life and a solid knowledge of the Lord. Evg. Bryant was baptized in the name of Jesus Christ in Stuttgart, Germany where she accepted Jesus Christ as her Lord and Savior. While in Germany, she was a member of a gospel singing group. Upon returning to the United States, Evg. Bryant would eventually become a member of the Church of the Lord Jesus Christ where she continued her ministry. During that time, Evg. Bryant became an ordained minister in New Orleans, Louisiana. Through her ministry, Evg. Bryant shared her gift of interpretation of dreams and ministered to those in need of spiritual healing. She also played the organ at her home church and led the worship services. She made time to visit people who suffered from various illnesses to pray for their healing, whether it was at their homes, their jobs, the store, or at the hospital. Evg. Bryant began her career as a foreign language instructor in Missouri. She also held administrative roles while in Germany. Evg. Bryant continued her career in Human Resources at the Department of Veterans Affairs where she retired after 30+ years of service in North Little Rock, Arkansas. Post retirement, she worked in various managerial roles in the hospitality industry. Evg. Bryant was loved by many who knew her personally around the city, throughout the country, and internationally. She loved holiday gatherings and eating out at her favorite restaurants. She also enjoyed long road trips, which included cross country and across the border trips with her children and close friends. She was preceded in death by her parents, Cassie M. and Lawrence C. Holt, Sr.; her husband, Earnest L. Bryant, and her three brothers, Gerald Forch, Rudolph Forch, and Lawrence Holt, Jr. She leaves to cherish her memory; her four children, Kenneth Reed, Jr. (Luciana) of Little Rock, AR, Colin Reed, Sr. (Jennifer) of Fort Bragg, NC, Vincent Bryant (Amy) of Little Rock, AR and Sonya Bryant of Washington, DC; grandchildren; her sister, Rita Dyer (Oscar) of Little Rock, AR, brothers and sisters in-law; nieces and nephews; great-nieces and great-nephews; cousins; godchildren; and a host of friends.

The family of Evangelist Bonnie Bryant created this Life Tributes page to make it easy to share your memories.

Send flowers to the Bryant family.