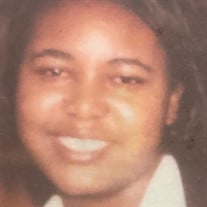 With sincere regret, the staff of D.L. Boyd Funeral Home, LLC., wants to extend our deepest sympathy to the Mc Phearson Family. Mrs. Gloria “Dean Mc Phearson’s earthly temple is now resting in the care of D.L. Boyd Funeral Home. John 11:25-26 Jesus said unto her, I am the resurrection, and the life: he that believeth in me, though he were dead, yet shall he live: And whosoever liveth and believeth in me shall never die. May God bless and keep you in the days ahead as you gain strength from the memories of Mrs. Gloria “Dean” Mc Phearson. Gloria “Dean” Mc Phearson, was born March 24th, 1953, in England, Arkansas to the late, Henry Williams, Sr. and Ruthie Lee Smith. Gloria received her wings on March 13th, 2019 at her home. Gloria confessed her faith in Jesus Christ at an early age and became a member of Paradise Baptist Church, which was once in Scott, AR before moving to their new location in North Little Rock, AR under the leadership of the late Pastor Lloyd Summons. She served and worshiped under current Pastor, Leonard Burgest until death. Gloria “Dean” was a loyal and dedicated wife to her only husband of 47 years, Johnnie “Main” Mc Phearson. Although she never had any children of her own, she had plenty of nieces and nephews that she helped raise. Gloria “Dean” was the type of Sister, Aunt and friend you could call on for any reason, whether it was to listen, prepare a dish or babysit, she was always there. Gloria “Dean” would spend her last dollar buying and cooking dinners for family member’s birthdays, but we all knew she was trying to keep the family tradition going. Aunt Dean, you will truly be missed. She is preceded in death by her parents, Henry and Ruthie Lee Williams, Sr.; three sisters, Mary Lewis, Jessie Lee Hall and Rosie Lee Williams; two brothers, Amos Martin and Dewayne Williams. She leaves to cherish her memories of 47 years, her husband, Johnnie “Main” Mc Phearson, three brothers, Henry “Hank” (Lavern) Williams, Jr. of North Little Rock, AR, David (Veronica) Smith, Sr. of Scott, AR and Michael (Kathy) Connett of Jacksonville, AR; three sisters, Lois “Jenny” (George) Durham, Rosetta Spencer both of North Little Rock, AR and Lisa (Lee) Hubbard of Little Rock, AR and a host of, Nieces and Nephews. Feel free to sign the guest book and leave a comment for the family of Mrs. Gloria “Dean Mc Phearson.

The family of Mrs. Gloria Dean Mc Phearson created this Life Tributes page to make it easy to share your memories.