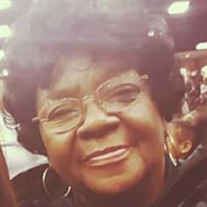 With sincere regret, the staff of D.L. Boyd Funeral Home, LLC., wants to extend our deepest sympathy to the Tucker Family. Ms. Laura Jean Tucker's earthly temple is now resting in the care of D.L. Boyd Funeral Home. John 11:25-26 Jesus said unto her, I am the resurrection, and the life: he that believeth in me, though he were dead, yet shall he live: And whosoever liveth and believeth in me shall never die. May God bless and keep you in the days ahead as you gain strength from the memories of Ms. Laura Jean Tucker. Laura Jean Tucker was born February 3, 1945, in Charleston, Mississippi to George Crump and Cora Williams-Crump. By every account she was intelligent, joyful, loving and a gifted woman with a gentle nature that would serve her all her life. She accepted Christ at an early age and received the Holy Ghost under the leadership of the Pastor Chamber, Pastor of Miracle Revival Center, Maywood, Illinois. She served faithfully in the music ministry at Miracle Revival Center. She later moved to Crossett, AR were she also served on the music ministry under leadership of Pastor Charles Atkins, Faith Center Church, Crossett, Arkansas. Later she became a member of Covenant Faith Praise & Worship Center, Sherwood, AR, under the leadership of Apostle Brenda & Pastor James Jefferson. She was a true woman of faith, believing that God could do anything but fail. On January 7, 1964, she was united in marriage to Ernest A. Tucker, Jr., and to this union, they were blessed with two children. On Friday, July 20, 2018, Mother Tucker went home to be with the Lord. She was preceded in death by her parents, George Crump and Cora Williams-Crump; grandparents, Jimmy Crump & Sammie Avant (Paternal) and Robert & Beulah Williams (Maternal). Mother Tucker leaves to cherish her memory to her husband of thirty-eight years, Ear-nest A. Tucker, Jr., their children: Lisa Elayne Tucker and Christopher A. Tucker, one sister: Callie (Herbert) Ballard of Sugar Grove, IL.; nine grandchildren (Sherrise Renee Tucker-Lindsey, Shante & Brittney Ann Bowen, Jonathan, Jennifer and Jeremy Tucker-Jackson, Tevarus Tucker, Jerrell Baker and Jaylen Tucker) and fourteen great –grandchildren, a special cousin, Rev. Donald Crump, nephews: Lamar (Keely) Simpson and Kevin (Sandra) Simpson, a large spiritual family, other relatives and friends who will miss her warm smile, gentle and harmonious voice. Services entrusted to: D.L. Boyd Funeral Home, LLC. “Helping Families Honor The Lives of Those They Love”. Feel free to sign the guest book and leave a comment for the family of Ms. Laura Jean Tucker.

The family of Ms. Laura Jean Tucker created this Life Tributes page to make it easy to share your memories.

Send flowers to the Tucker family.