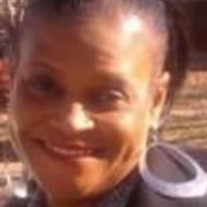 Marilyn Oneitha Allen-Walls, transitioned from this life to her new home in Glory October 11, 2021. Marilyn was born July 23, 1963, in Dermott, Arkansas to the late, Herman and Willie Mae Allen. She was the youngest of thirteen (13) children. She professed her faith in Jesus Christ at an early age as a member of Little Zion Missionary Baptist Church in Baxter, AR under the leadership of Reverend Tommie L. Hudspeth, Sr. Marilyn remained a member of Little Zion until 2007 when she united with Longley Baptist Church in Little Rock, Arkansas under the leadership of Pastor Dwight D. Townsend, Sr. Marilyn attended school in Dermott, AR and was a proud “Ram” in the graduating class of 1981. She was an athlete and a stellar power forward on the Girls Basketball Team. Following high school she went on to attend Arkansas State University in Jonesboro, AR where she received a Bachelor’s degree in Physical Education. While in college, she married her high school sweetheart, Donnie Joe Smith (deceased) and to their union two (2) children were born, Carlus Marcel Smith and Evelyn Brianna Smith. Because of her desire to serve others, Marilyn continued her education and graduated from Pine Technical College in Pine Bluff, AR with a degree as a Licensed Practical Nurse. Her true calling was nursing and was evidenced by her work ethic and her sincere passion to serve others in this capacity for over twenty (20) years. As a child, Marilyn enjoyed singing with her niece as they followed her father around from church to church. For years, she was a member of her hometown gospel group, “Voices of Deliverance.” She also enjoyed dancing, cooking, fishing, and allowing her grandchildren to run wild and get away with everything. She loved cooking big meals and barbequing during family gatherings. “She was a great ball of fun.” Later in life, she married Freddy Walls, who preceded her in death. Marilyn is also preceded in death by her parents: Herman and Willie Mae Allen, and siblings: Fred Earl Applegate, Bobbie Faye Nelson, Herman “Sonny Boy” Allen Jr., and Dorothy Lucille Richardson. Marilyn leaves to cherish her memory two children, Carlus Marcel Smith and Evelyn Brianna “Ann” Smith. She also leaves four grandchildren, Carlus Smith Jr., London Smith, Jaylen Nalley, and Madison Grace “Beaner” Mitchum; two brothers, Luther Allen and Larry Allen; six sisters, Maxine Williams, Inez Broadway, Earthalene Adams, Curtistene Jackson, Clementine McDuffie, and Olinda Allen; one special niece and nephew, Carolyn Jones-Hargrove and Cedric Allen and a host of other nieces, nephews, cousins and friends.

Marilyn Oneitha Allen-Walls, transitioned from this life to her new home in Glory October 11, 2021. Marilyn was born July 23, 1963, in Dermott, Arkansas to the late, Herman and Willie Mae Allen. She was the youngest of thirteen (13) children.... View Obituary & Service Information

The family of Marilyn Walls created this Life Tributes page to make it easy to share your memories.

Send flowers to the Walls family.