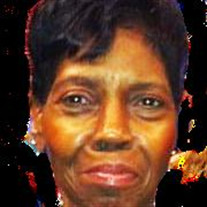 Our beloved Mother, Nettie J. Rouse passed away peacefully at her home and went to be with our Lord and Savior Jesus Christ on April 5th, 2022, following a short illness. She was the baby girl of nine children born to the late Andrew and Queen Ester Jordan (née Lamar) on November 9th, 1946, in Scott, Arkansas. Nettie professed a hope in Christ at an early age and united with Mt. Moriah Baptist Church in Scott, AR, under the leadership of Pastor Henderson White. Nettie was educated in Catholic schools where she graduated high school from St. Bartholomew's Catholic School in Little Rock. During her formative years growing up in Dixie, Nettie, and her siblings formed an all-girl gospel quartet and would perform at local churches and venues throughout Arkansas. One day, while performing at a venue another quartet group on program led by at the time a young man named James Rouse Jr. (affectionately called “Jimmy”) caught her eye and this led to a courtship and a 47-year marital union. Upon James’ graduation from high school, he moved to California to pave the way for his new family and Nettie joined him shortly thereafter. While rearing her three children, Lawrence (Lou), LaVonda (Twis), and LaNea (Rudy), Nettie was able to successfully forge a 25 + year career working for Pacific Bell holding various positions from telephone operator to manager at the time of her retirement in 1996. All who knew Nettie loved and respected her work ethic. She had a keen acumen for handling finances and was recognized by Pacific Bell on several occasions for her outstanding work performance in this area. After retirement Nettie and James returned to their home state of Arkansas and became the owners of True Vine Cleaners. She also joined the charge with her husband in honoring her late mother-in law’s memory as a lifetime educator, working on the Clementine Mathis Rouse Scholarship Fund, where the board awarded a Little Rock High School senior pursuing higher education, $1,000.000 for four years. She and Rev. James W. Rouse Jr. faithfully served the Lord at Trinity, Pleasant Grove, Cottrell Chapel, and Reed Memorial throughout the Arkansas Region of the CME First Episcopal District. Nettie also served as President of the respective West and East District Ministers’ Spouses and of the Arkansas Region Annual Conference. During her time as West District president she implemented the Sheila Sutton Memorial Scholarship fund in memory of one of the Ministers’ Spouses members Sheila Sutton, who unexpectedly passed away. She also coordinated donation drives at the regional level in conjunction with the Missionary Society for local Arkansas non-profits. She was a woman who spoke her mind and conviction, a woman of integrity who wanted things done correctly, a woman of quick wit, even though she stood 5’3 she carried a big stick. Nettie was predeceased by her husband of 47 years Rev. James W. Rouse Jr. and their dear daughter LaNea Rouse-Cooper (Rudy). In addition, she was preceded in death by her parents Andrew and Queen Ester Jordan, sisters Ruth Dickerson, Barbara Davis, Velma Foster, Almeda Stewart and brothers, Andrew Jordan, Jr., Rev. Herman E. Jordan, and Walter Donnell Jordan. Nettie leaves to cherish her memories, her children, Lawrence and LaVonda Rouse both of Los Angeles, CA; grandchildren, Autumn Rouse of Seattle, WA, Aaron and Aliyah Rouse of Los Angeles, CA and Carl Watson of Grand Prairie, TX; sister, Queen Ester Hampton of Little Rock; sisters-in-law, Linda Miller and Sandra (Gary) Rouse-Kopp of Los Cruces, NM, and Janet Rouse of Tennessee, and a host of nieces, nephews, family and friends. She was truly a lady of distinction, one of a kind who will be dearly missed and whose legacy will forever live on in our hearts. However, while Nettie will be dearly missed by all who knew her, she would want everyone to know that she was more than prepared and eager to meet her Lord and Savior. She had run her race and was prepared for eternal rest. The Rouse family would like to thank the staff of Arkansas Hospice for the support and care they provided during her final days. Thank you for your kind words and prayers during this difficult time. They are truly appreciated.

Our beloved Mother, Nettie J. Rouse passed away peacefully at her home and went to be with our Lord and Savior Jesus Christ on April 5th, 2022, following a short illness. She was the baby girl of nine children born to the late Andrew and Queen... View Obituary & Service Information

The family of Nettie J. Rouse created this Life Tributes page to make it easy to share your memories.

Our beloved Mother, Nettie J. Rouse passed away peacefully at...

Send flowers to the Rouse family.