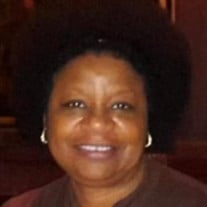 Life’s Reflections Rosemary “Rose” Lovelace Ricks: Sunrise January 11, 1956 - Sunset October 12, 2021, peacefully transitioned to eternity with her family by her side. Rose was born in Little Rock, Arkansas to Edgar and Victoria Lovelace. She attended Little Rock public schools and she was a dedicated employee at Arkansas Blue Cross Blue Shield for 35 years, until her retirement in 2019. Rose confessed a hope in Christ at an early age, at St. John Baptist Church in East Little Rock, where she served as a Jr. Usher. But, on May 18, 1984, at the 8:00, Friday Night Revival, she became saved and sanctified! And, she has been spreading the word of God’s love ever since. Most recently, she was a member of New Beginnings Apostolic Church, where she was a dedicated member until her death. Rose was united in holy matrimony to Robert Lee Ricks, Sr. on August 22, 1987. From this union are two beautiful daughters, Hannah and Tori. Rose will be remembered for her love of God, her love of her family, her smiling face, her beautiful hair, and her love of The Dallas Cowboys! She leaves to cherish her loving memories: daughters, Hannah (Paige) and Tori Ricks; stepchildren, Robert Ricks Jr. (Sherrie), Cassandra Ricks, and Latoya Ricks; siblings, Jerry Lovelace, Sr., Ernie Dodson (Jon), Bobby Lovelace, Sr. (Mary), Michael Lovelace, Sr., and Arlene Lovelace; grandchildren, Robert Ricks, III, Secily Ricks, Skylar Ricks, Deja Terrell, Terrell Roston, Durell Childress, Makila Gray, and a host of nieces and nephews whom she adored. In addition, she also leaves two dear friends Barbara and Sis. Judy, and a fur-grandpuppy, Sir Duke Ricks. Rose was preceded in death by her parents, Edgar and Victoria Lovelace; her brother, Ronald Lovelace, Sr.; her sister, Shirley Lovelace and her stepson, Tony Ricks.

The family of Rosemary Lovelace-Ricks created this Life Tributes page to make it easy to share your memories.

Send flowers to the Lovelace-Ricks family.